May Day LA 2007: The bravest reporter in the world yesterday 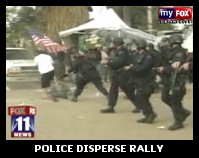 Fox 11 has a very good first-hand video report, featuring their local reporter who had been covering the rally and said she heard no notice to disperse, as claimed by the police. Her crew was roughed up, as seen in the video.”
Police Fire Rubber Bullets, Tear Gas into Crowd at Los Angeles Immigration Rally, OC Liberal, May 2, 2007

Y’know, I thought the LAPD was getting better but I must be kidding myself. FYI: this is why I don’t go to protests, marches, street fairs, really anything the LAPD in RIOT FUCKING GEAR, might show up at.

I must say, if you watch to the end of the video, that reporter, Christina Gonzalez, is one brave woman. I don’t know many men who’d get between a charging LAPD in RIOT FUCKING GEAR officer and their victim. Brava, sister. But… why do you work for Faux Nooze? (And why can’t I embed this video?)

UPDATE:
“The Radio and TV News Association has called for an investigation. Chief Bratton will speak at a 3 pm news conference. Daniel Hernandez checks in on his blog with the coverage in Spanish-language and ethnic media.
Also: KPCC’s Patricia Nazario was treated at a hospital for injuries to her hand, ribs, and ankles from a police baton, the station reported.”
‘Roughed up, to put it mildly’, LA Observed, May 2, 2007

So, now I must wonder… why was the LAPD so great last year with a million plus crowd and lost it with a crowd of about 500? Why is that?

Also in that article:

“‘To say we are outraged is an understatement,” said state Assembly Speaker Fabian Nunez, D-Los Angeles. ‘We want those responsible in the highest levels of the LAPD to pay consequences.”

“The police union criticized Nunez for what it called ‘police bashing.’

“‘…Setting up the population to believe that law enforcement is the enemy is a dangerous game,” union President Robert Baker wrote in a letter Friday. ‘It provokes a lethal us-against-them, anti-law enforcement mentality that encourages violence against police officers.'”

Oh, c’mon, Police Union, hasn’t the LAPD been their own worst enemy all these years? Maybe I’m naive, but I’m willing to believe they can change for the better, and I thought they had.

Let’s face it, there’s still a ways to go before the LAPD perfects out. Wouldn’t it behoove the Police Union to, y’know, like, help out, instead of getting all defensive? This is LA, we can do anything.

I really wish someone, not me, would write a “What’s wrong and right with the LAPD and where do we go from here” kind monograph. It would certainly help me sort my head.

UPDATE 050707: Villaraigosa visits site of May Day melee
The L.A. mayor assures MacArthur Park visitors that they have the right to play or march in safety there, by Bob Pool, Times Staff Writer 9:33 PM PDT, May 6, 2007. Or here if the story is behind a pay-for-it wall. Love ya, LAT, but you archive stuff too fast for my readers.

UPDATE: “In the aftermath of the confrontation at MacArthur Park last week, I have formed a Special Task Force that will rigorously and honestly investigate the events of the May 1 protest. Chaired by Councilmembers Jack Weiss (chair of the Public Safety Committee) and Councilmember Ed Reyes (whose district includes MacArthur Park), the Task Force will expedite the investigation and provide a public forum to relay these findings to our residents. Swift action, open investigation, and holding responsible parties accountable will help restore the trust that has been breached.”
Special Task Force on May 1 Protests, by lacityorgcd13, Eric Garcetti, May 7, 2007

UPDATE 050807: “The Los Angeles Police Department deputy chief who was the highest-ranking officer on duty at the violence-marred May Day immigration rally at MacArthur Park was demoted to commander, Chief William Bratton said Monday.

“In addition to the reduction in rank, Cayler “Lee” Carter was placed on home assignment while a series of investigations continue into the rally last Tuesday that ended with officers firing foam-rubber bullets and using batons to strike some demonstrators and media gathered in the park.

“Carter, a 33-year veteran of the LAPD, is commanding officer of operations at the department’s Central Bureau.

“Meanwhile, Cmdr. Louis Gray — the second-in-command during the rally and assistant commander of the Central Bureau — was reassigned to the Office of the Chief of Operations, Bratton said. Gray is a 39-year department veteran.

“Bratton said he will recommend a replacement for Carter during tomorrow’s Police Commission meeting. A replacement for Gray will be announced at a later date, he said.”
Ranking Officer at May Day Rally Demoted, ABC.com, May 7, 2007

This entry was posted in annoyed, horrfied, impressed, politics. Bookmark the permalink.